Heart of tuscanyThis city is called the heart of Tuscany, a museum city, a flourishing city. Actually, its name is Florence, which arose in 59 BC and is translated as “blooming”. Whatever…

Gourmet tourism: what products will have to go abroadDue to Russia's food sanctions, gourmet tourism is expected to flourish. In connection with the introduction of a ban on the import of a number of food products from EU… 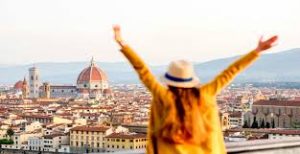 In 1861, the painter Odoardo Borrani, a humble singer of Florentine terraces and studios, painted a picture called the date – April 26, 1859. A young woman is sewing, sitting by the open window, behind her back in the corner of the room is a halberd, tied with three colored ribbons folding in the likeness of the Italian flag. Before her on the table are fabrics of the same colors – red, white, green. From the window you can see the roof tiles of the house opposite and some sky. For clarification of the further circumstances of that day, one should turn to Florentine history.

The Grand Duke of Tuscany Leopold II was one of the most liberal rulers of that time – with the very beginning of the 1848 revolution he granted Tuscany a constitution and some freedom of the press, publicly advocated independence, granted political asylum to refugees, and even managed to send troops to war with Austria. this in kinship with the Austrian imperial family. Nevertheless, when a republic was proclaimed in Florence in February 1849 and an interim government was created, Leopold, as a formal autocrat, was forced to leave Tuscany, however, not for long – in April of that year he, with the help of all the same Austrian troops, and also securing support the population (in Florence they loved him very much) triumphantly regained the Tuscan throne. For ten years, he retained the title, balancing between boiling national interests and personal obligations to Austria – until in April 1859 another quasi-revolution began in Tuscany – volunteers (among whom, incidentally, was the artist of interest to us, Borrani ) rushed to help Piedmont and France in their struggle against Austria. Since Leopold II continued to remain neutral, on April 27 (exactly the day after the events depicted in the picture), being a peaceful man by nature, he was equally elegantly overthrown and left his family from Florence to Bologna, where on July 21, 1859 and signed the abdication of the throne – this time for good. He went down in history as a politician as pleasant as, using the word Leskov, non-natural.

All these historical vicissitudes fully explain the presence in the picture of a halberd, a flag and a rebel woman. However, I stood before her for five minutes, not because of the eventual background of a century and a half ago. As a matter of fact, I saw this tiny canvas of Borrano by accident – in the Florentine Palazzo Pitti in the gallery of contemporary artists. I was struck by the captured window and the light, air and meaning pouring into it. The fact is that I also came to Florence literally in order to look out the window. What is most surprising – the opening that interested me was on the other side of the street from Pitti’s Palace.

On April 26, 1859, another woman in Florence sat by the window in the same way and drove a needle. She had no halberds, however, and she hardly sewed a flag after all. She was a pale Englishwoman with big eyes and heavy curls falling like drapes, suffering, according to various sources, from nerves, spinal cord disease and (or?) Tuberculosis. She wrote poetry and herself was married to a poet. Her husband, Robert Browning, was then considered a great English poet, so there is nothing surprising in the fact that his memorial plaque hangs inside the house where they lived. It is much more surprising that his wife has two such boards: one directly above the doors, the other on the left side, if you face the entrance. The poem, which she composed in this house in 1851, was to blame for eight years before Odoardo Borrani painted his picture. The poem was called “The Windows of the House of Guidi” and it described the revolutionary events of Risorgimento over two thousand lines (the Italian theme was generally popular with Victorian poets). But it was a view from above, namely, from the window. From the second floor she spied and eavesdropped on how the green-white-red-banner crowd rejoiced in the square, how the Austrian army marched around the city later, and how the child wept in communion with secrets. In Britain, the poem was accepted coldly enough, but the Florentines ignited the creator with incredible reverence, and in a city that already consists of signs of gratitude to heaven, as if it became one protector more, albeit of a purely worldly character. The intercessor was called Elizabeth Barrett, and at the same time she was revered by many as the first poet of England.

Finding this house – the Quattrocento era building – is very simple: it is directly opposite the Pitti Palace. You need to go Ponte Vecchio, walk a few minutes along Via Maggio to the small square of San Felice with the church of the same name and the obelisk of Giuseppe Gini. The city was winter, a month like ending the New Year’s whirlpool and therefore completely empty. In addition, taxi drivers went on strike, additionally slowing down the already leisurely course of local time. I sat on San Felice under the obelisk and read the Florentine letters to Elizabeth. Blankets and sheets hung from the windows of Casa Guidi, as if confirming Murat’s words about the fact that in Florence…

Hills of florenceAlready in the XIV century, a large number of "rich villas, towers, courtyards and gardens" in the vicinity of Florence made a strong impression on travelers, according to Giovanni Villani,…